It is no mere coincidence that St. Hans Church is connected with Odense Castle by a connecting wing. In the Middle Ages the church was an abbey church, and the castle was a monastery; and a lot of brickwork from the old monastery has been preserved in the wings of the castle.

The monks who lived here belonged to the Order of St. John of Jerusalem, which was founded in Palestine about 1100. At that time some crusaders built a home in Jerusalem for sick and homeless pilgrims and crusaders. Later this order was imitated in most European countries, so that in fact all later hospital service of the Middle Ages took the relief work of the Order of St. John of Jerusalem for a model.

It has been proved that members of the order were in Odense already in 1280. The three-winged monastery was, however, probably not finished until about 1400, and the hospital, the present vicarage, was built about 1450.

At the time of the reformation the monastery was made a royal castle; the northern wing, the actual castle building, is from 1720. It might be added that the monastery, the hospital, and the church together make up the only “centre” of the Order of St. John of Jerusalem preserved in Scandinavia.

Even before the monks arrived, there was a church where St. Hans Church lies today. It was a village church called St. Michael’s Church. Unfortunately we know very little about how it looked,–it may have been a little Romanesque church made of ashlars from the first part of the 13th century. During the 15th century it was so thoroughly rebuilt that the original features were totally lost.

The very long chancel is typical of an abbey church; it was built in the middle of the 15th century. The eastern end is somewhat askew due to the street boundary. The chancel with its many different recesses is an outstanding example of Gothic flowering. The vestry in the north is, however, much later (1880). If we take a look at the aisles, the two easternmost bays in the southern and northern aisles are the oldest; they were originally transepts dating from the 14th century. The two westernmost bays in the southern and northern aisles are from the beginning of the 15th century, and they were ordered built by local noblemen attached to the monastery, to serve as mortuaries for themselves and their families.

The two westernmost bays in the nave were perhaps erected together with the connecting wing during the middle of the 15th century; the westernmost bay was, however, not given its present height until about 1500.

A most special feature of St. Hans Church is the so-called “outward pulpit” in the western part of the southern aisle. From outside it is seen as an aperture with a segmental arch, from inside it is accessible by means of brick steps. This “pulpit” is the only one of its kind in Denmark, and scholars are not agreed as to its function. Perhaps it served as a pulpit during outdoor services for lepers and the excommunicated; perhaps it was used to display the relics to the people, or for the sale of indulgences.

The church got its present-day look when it was given a thorough restoration (1878-80) after centuries of negligence. The northern aisle wall and all the corbie gables are from this restoration.

The Equipment of the Church

is baroque, from 1717. The separate figures represent Moses (left) and Aaron (right). The picture of Jesus in Gethsemane was painted in 1879 by Professor Carl Bloch, who made many similar religious paintings in other Danish churches; this painting however, is his most famous work.

The red velvet altar cloth was donated to the church by King Frederik IV, who built the castle and made the church a kind of chapel. His back-to-back monogram and the year 1719 can be seen in brocade on the cloth.

is early baroque from about 1650 and it was made by a local wood carver. On the panel the ten bridesmaids are seen; the carvings on the pulpit itself represent scenes from Christ’s life, from left: The Annunciation, the Wise Men, the Circumcision, the twelve-year-old Jesus in the Temple, and the Baptism. 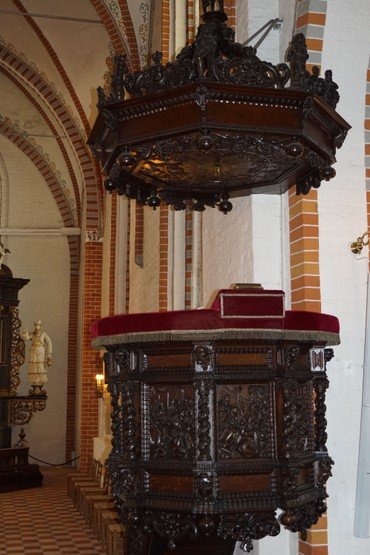 is the oldest piece of equipment of the church; the Romanesque granite font decorated with rope ornament and billets is from a time of the church about which we know nothing. 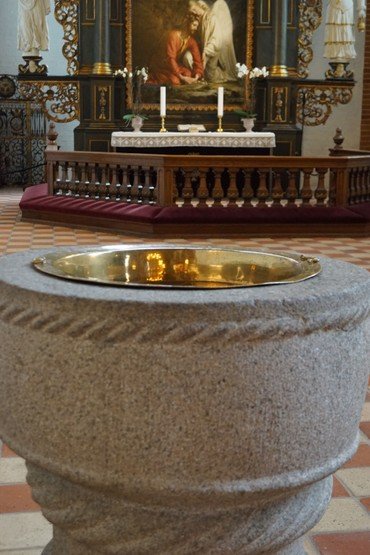 in the chancel is a late medieval piece and probably contemporary with the present chancel. The figure of Christ is taller than a man, and the cross is decorated with holly leaves and evangelist-symbols. 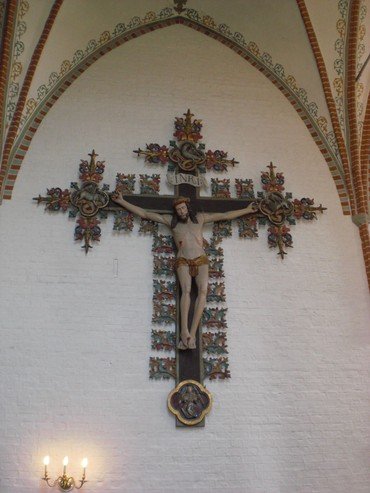 is made of oak and has solid iron furnishings and big padlocks. It is one of the oldest of its kind in Denmark and is presumably from the 16th century. 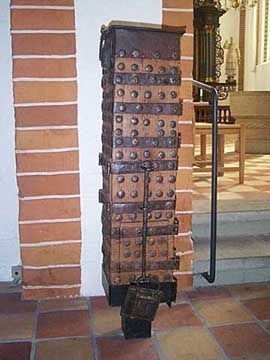 was built in 1962 and has 35 stops distributed on three manuals and pedal. It is certain that there has been an organ in the church since 1500. 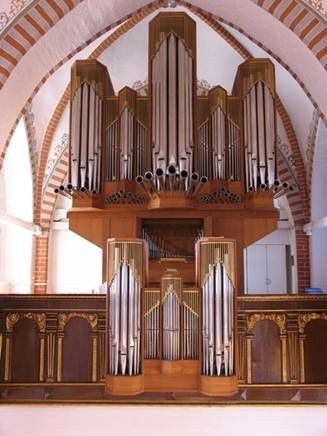 The Western Part of the Church

Above the westernmost bay (now porch) stands the old organ loft which goes back to the middle of the 17th century. In the north and in the south it is extended into the following severy. The north extension became a royal box, and above the door we see Christian V’s monogram and his motto: “Pietate et Justitia” (in piety and justice), and figures representing piety (folded hands) and justice (scales and sword) are carved in the doorposts.

In the porch there is a commemorative tablet for the famous writer of fairy-tales, Hans Christian Andersen, whose private baptism was confirmed in St. Hans Church on Easter Monday 1805.

In the tower, to which there is usually no admission, there are three bells. The oldest of them has no inscription, but is typical of the 14th century. The next is, according to the inscription, from 1496 (which is perhaps the year when the tower was built). The newest and largest bell was cast in 1792 of bronze from an old (perhaps medieval) bell.

St. Hans Church is rightly known for its collection of medieval tombstones,–tombstones that are now built into the walls of the aisles. They are monuments to local noblemen who built chapels and altars in the church during the last centuries of the medieval period. Those tombstones in the southern aisle which are medieval are: The tombstone in the eastern wall; the second, the third, the fourth and the fifth in the southern wall and that in the western wall; and all the tombstones in the northern aisle.

Number three in the southern wall is the oldest one in the church. It is from 1441 and is known for its rare motif: the widow giving her late husband a memorial flower.

The large stone in the western wall of the southern aisle is in memory of Lord High Constable Claus Rønnow († 1486), the highest ranking person buried in the church.

Most of the tombstones in the northern aisle belong to a single family: the Gildensterns. Anne Gildenstern’s graceful tombstone in the western wall is particularly famous because it is thought to have been made by the great artist Claus Berg, who made the altarpiece in St. Knud’s Church.